A shore excursion to Rome…it just sounds strange.  Normally we do not book excursions thru the cruise lines. Most of the time you end up with a lot of people in your group, you pay way too much money and you end up being rushed so you can sit and wait at a gift shop that they have no doubt partnered with. It’s really just not my idea of a fun day!  Now that being said there are exceptions!  If I plan to travel far from the cruise terminal, I will book an excursion thru the cruise line.  We also booked an excursion when we traveled to the Mayan ruins of Lamanai in Belize.  Rome was another example of a great time to book the excursion.  I am very happy that we decided to book a shore excursion to Rome.

OUR SHORE EXCURSION TO ROME

When we started researching Rome and what we wanted to do for the day, we very quickly became a bit overwhelmed.  Rome is an hour from the cruise terminal and you always hear about the trains being late in Italy.  I also kept reading about long lines to the museums.  We decided to bite the bullet and pay for a shore excursion to Rome.  There were many options available, but there was one in particular that hit all the stops we wanted!  We decided on The Colosseum, The Vatican Museum (including the Sistine Chapel) and St. Peter’s Basilica.  Seemed like a perfect itinerary to introduce us to the Eternal City.

The excursion was definitely not cheap and that was the hardest part for me.  I am used to booking things on my own so I had a bit of sticker shock on the price! What helped me get over it was the assurance that we would get to see all the sights we wanted to see and the ship couldn’t leave us behind if we are delayed getting back.  These are the main reasons that we booked our shore excursion to Rome this way.  You can be tempted with cheap rail tickets, but Rome is one of the top ports for people missing the ship!  I didn’t wanna be one of those people.

We received our tickets to get aboard the bus the day before we arrived in Civitavecchia. Our day in Rome was going to be a very long and mentally overloaded day! We arrived in port at 7am and we were not scheduled to arrive back from our excursion until 7pm (ship leaving at 8pm). We called it an early night so we would have lots of energy for the following day. Meeting our tour group in the showroom is a standard part of a shore excursion, then you listen for your group number and when it is time, you head down to the buses. With it being so early we spent the hour bus ride dozing off and watching the countryside go by. After one short pit stop along the way, we finally made it to Rome and stopped one last time to pick up our tour guide.

She spent a few minutes introducing herself and explaining the sights we would see and some of the protocol for entering the museums.  We each received a headset with a radio receiver on a lanyard to wear.  Since you are with a larger group and can’t all be right next to the guide these were good to be able to hear the explanations of what we were seeing and the in-depth history.  Our first stop would be the Colosseum, followed by a free time break for lunch, then the Vatican Museum and finishing with St Peter’s Basilica.

One of the first things I learned about Rome is that there are people everywhere!  It was a little difficult at first to stay completely with the group when trying to dodge people that are walking without regard for others.  A little frustrating for sure, but you get the hang of it pretty quickly.  Our tour group had an assigned entrance time, which was really nice after seeing the regular line.  We still had to wait in line but it was not nearly as long as the other lines!  Also, it is mandatory to go thru a security screening before you are able to enter the Colosseum. 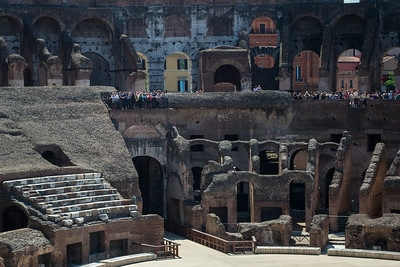 The Colosseum was incredible to see in person!  The structure is huge and to hear the stories told by our guide…I just couldn’t even imagine what it was like back when it was a functional arena.  It was unreal to hear about the number of human and animal lives that were lost for entertainment.  We were given about 30 minutes of time to explore without the group.  Pay attention to where you are and how far you have gone. Many of the areas look the same and it would be very easy to get turned around.

Before going into the Vatican Museum we were all given about an hour to find lunch before meeting back up with the group.  We chose a small cafe that offered various pasta dishes and wine as part of their lunch menu.  We still had a full afternoon of walking around Vatican City, so we enjoyed our large pasta lunch and met back up with our group. 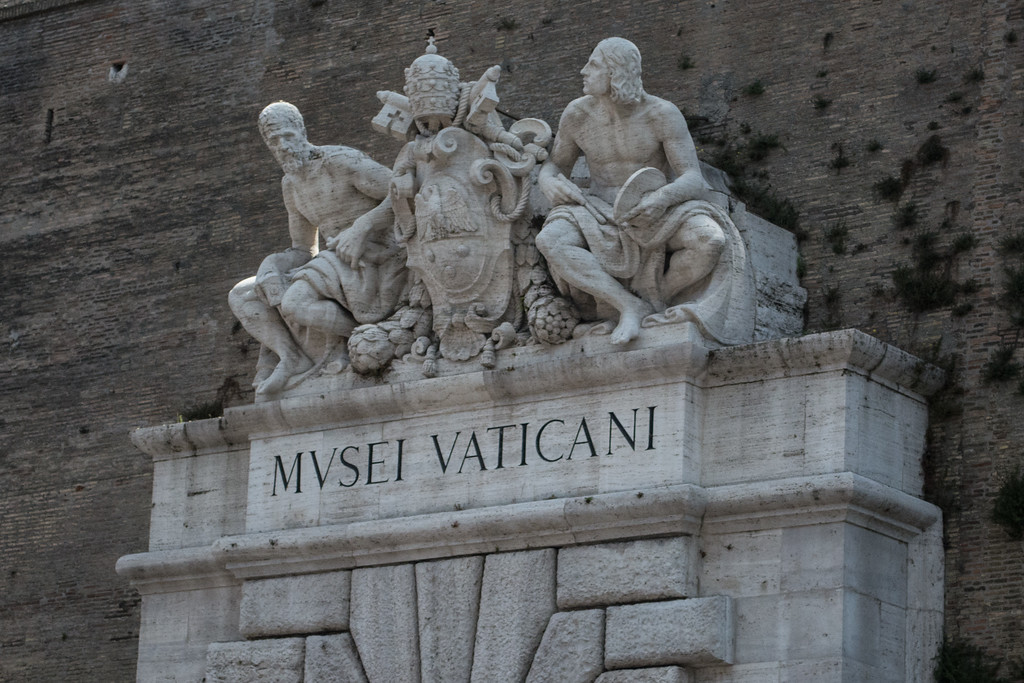 Entering the Vatican Museum you will also be required to go through another security checkpoint.  The lobby area was so crowded that everyone was nearly shoulder to shoulder.  We spent a few minutes in a courtyard area where our guide told us all about the Sistine Chapel.  She had to take this opportunity to talk to the group because once you enter the Sistine Chapel your are not supposed to talk or take any photographs. The guards are pretty strict about these rules! 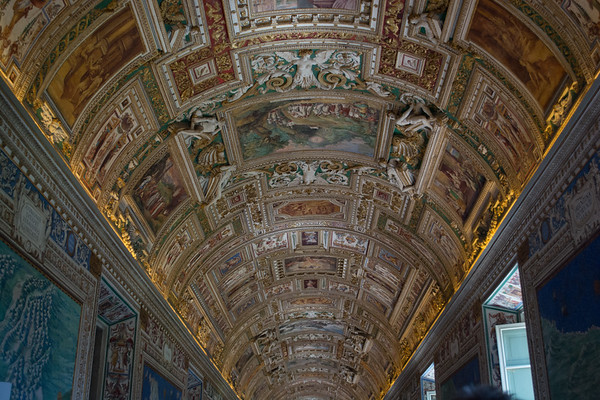 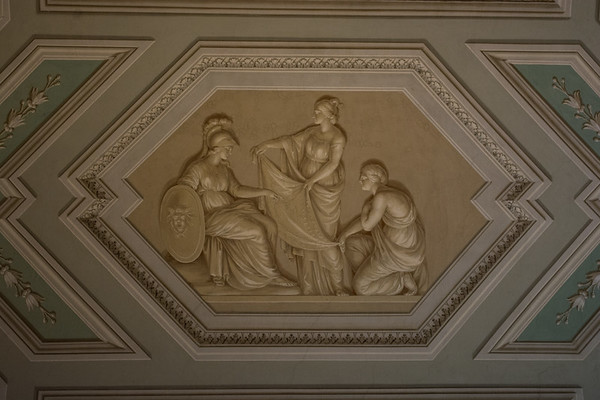 Everywhere you look throughout the entire museum will be nothing short of spectacular.  From statues to tapestries to ancient maps…it is just one beautiful room after another.  The end of the Vatican museum tour ended with going into the Sistine Chapel.  I have to admit I have never been in a more crowded room!  I thought the lobby was shoulder to shoulder crowded, but this was way more crowded.  You aren’t supposed to talk, although you hear people talking in hushed voices and the guards there are quick to shush people who talk too loudly.  It is pretty amazing to see in person and see all the things that the guide told us to look for.

Here is a fun fact that I didn’t previously know; before painting the ceiling of the Sistine Chapel, Michelangelo had no painting experience…he was a sculptor.

St. Peter’s Basilica is quite possibly one of the largest churches I have ever been in!  There is so much to see while here and with a tour group I do feel like I was a bit rushed.  There are many statues, paintings, and tombs to see while you are here.  During our visit, we learned that this is a special year due to Pope Francis declaring 2016 will be the Holy Year of Mercy.  The Holy Door was opened and we saw many people coming into the basilica as part of their pilgrimage. 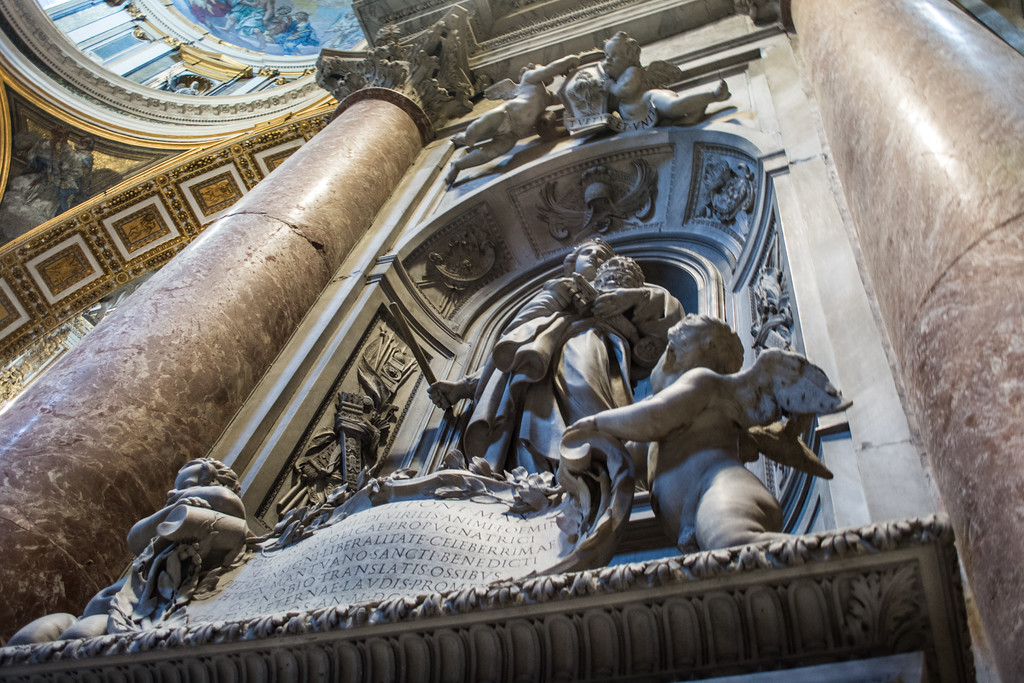 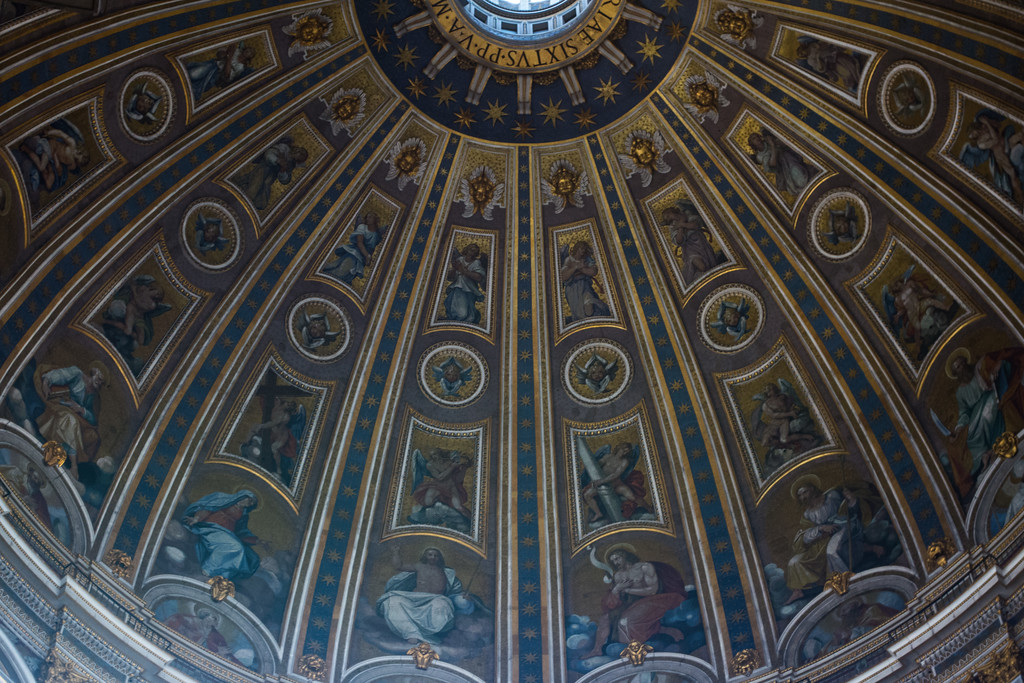 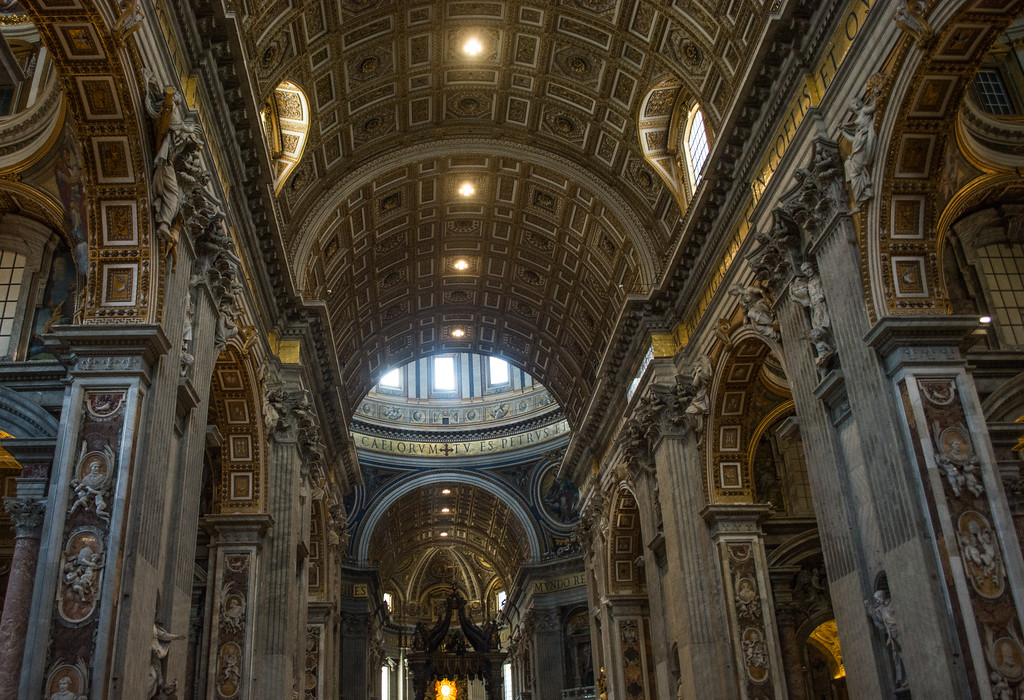 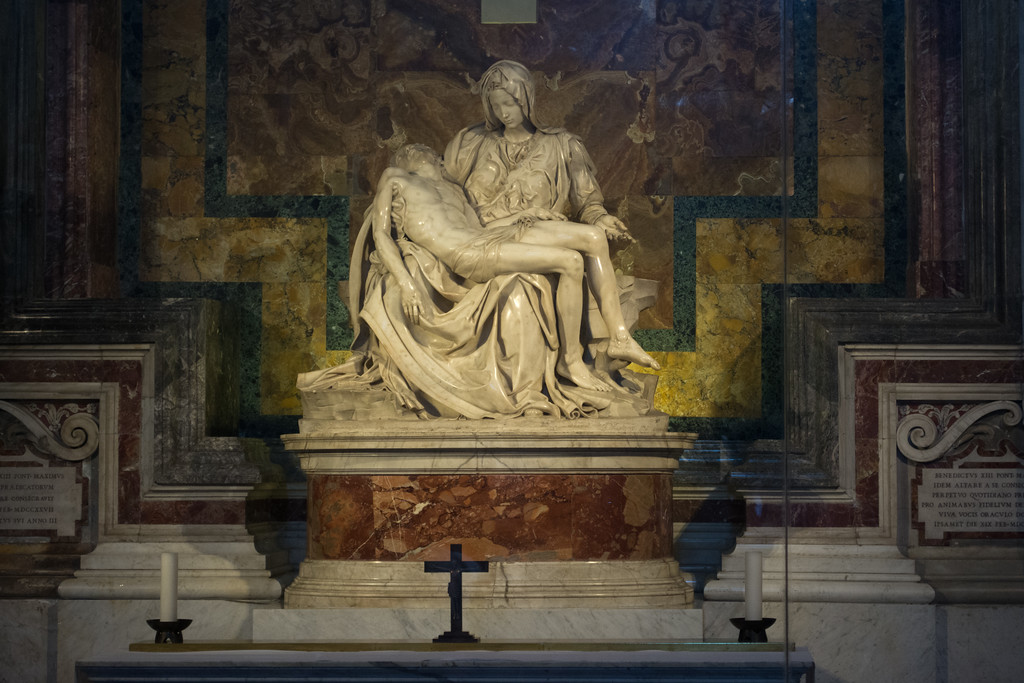 Just outside St. Peter’s Basilica is St. Peter’s Square.  There are rows upon rows of chairs that are set up for mass.  There is also the Swiss Guard standing watch that you can see and will recognize by their brightly colored uniform.  Leaving the square there is a small trailer off to one side and you may not even realize it but that is the Vatican Post Office.  You can stop in and they will provide everything you need to send something from the Vatican.  Sorry, the Vatican does not do passport stamps. 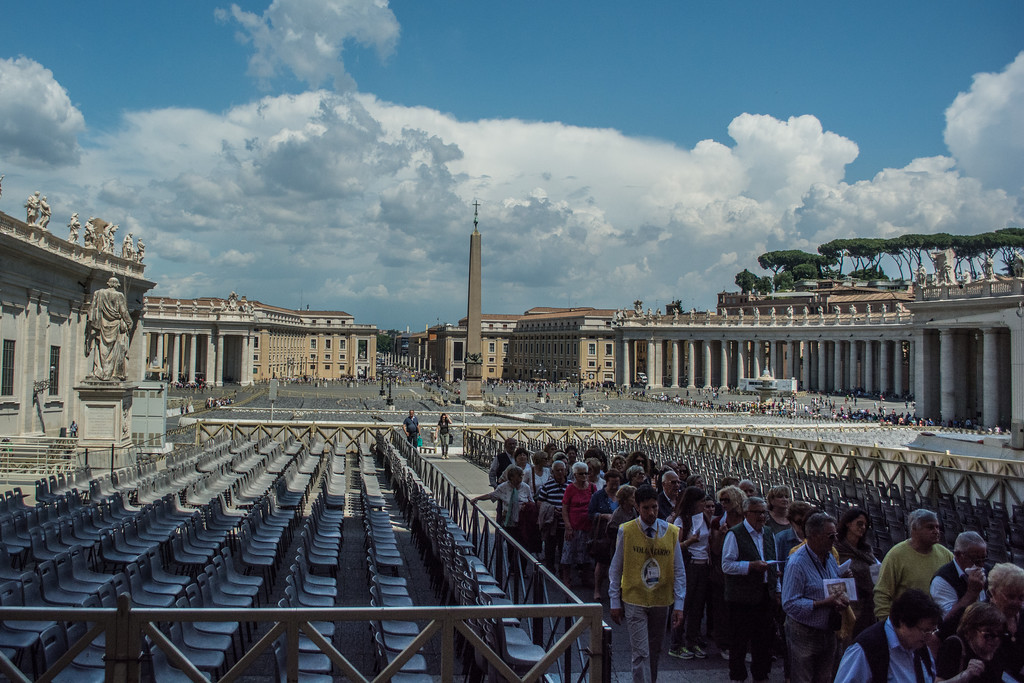 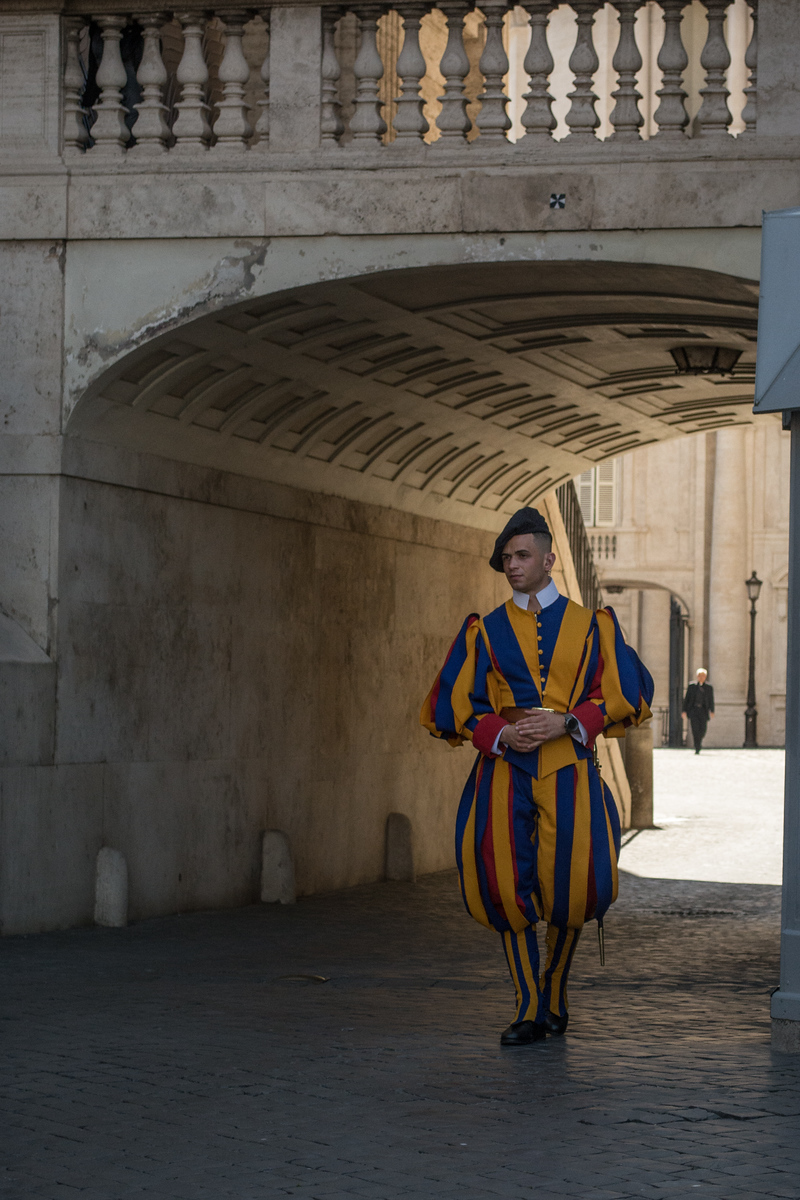 After the very VERY long day of seeing many sites and walking who knows how many miles, it was finally time to get on the bus.  On the bus, they offer a variety of drinks for purchase, consisting of beer, soda, and water.  After a quick drink, I think nearly everyone took a short little nap as we made our way across the Italian countryside.

Navigating The Barcelona Metro Like A Pro1.5K Total Shares