While looking for a family trip, we found a cruise that would allow us to take the kids for a few days right after their school year ended. The cruise would depart San Diego on 27 MAY 2015, and arrive in Vancouver on 30 MAY 2015. We chose this location because we were slightly familiar with Vancouver and knew that the kids would probably enjoy spending time there.

Pre-Cruise: Using Orbitz, we found and obtained a one-way car rental to get from Phoenix, Arizona to San Diego. The airport car rental location is about 1.5 miles away from the cruise terminal, along a major bus route, so I could either walk it or catch a bus for $2.25 after dropping the car back with the rental agency.

On Memorial Day (25 MAY), we loaded up the car and set off around noon for our 5-6 hour drive to San Diego. We had chosen to stay at Humphrey’s Half Moon Inn and Suites http://www.halfmooninn.com , because we had stayed there previously and really enjoyed the location and the things to do. The hotel is located on Shelter Island, right across from Coronado Island, and the ship would pass right by the hotel on the way into and out of port, so if we woke up early enough (we did) we could see the ship coming into port. Humphrey’s has an onsite concert venue with some really great acts in an intimate outdoor setting. It’s worth a look if you need a stay in San Diego. 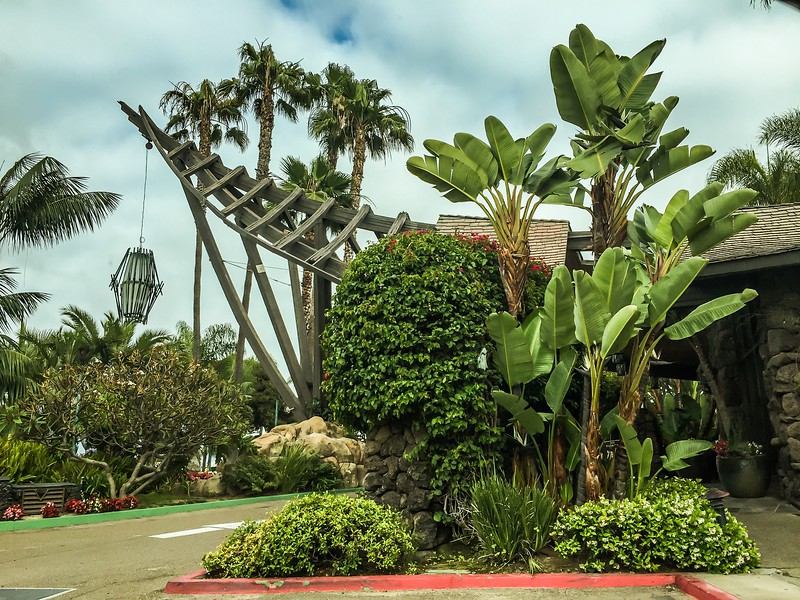 Humphrey’s Half Moon Inn had good rates, and their “Resort Fee” includes a passport book that has coupons for savings in their lounge, as well as free WiFi. The lounge onsite has a great happy hour, where many of the items on their menu are discounted heavily AND you can use their coupons to save even more. On check-in, we also received 4 coupons for free drinks at the pool bar or the lounge, and were quite happy to use them and sit by the pool (in spite of the cloudy weather).

Since happy hour at Humphrey’s was not taking place on Monday due to the Holiday, we opted to go to Bay Club, which is a neighboring property, for their happy hour. The happy hour prices made it somewhat reasonable to have some appetizers. But the happy hour deals were not nearly as good as the next night at Humphrey’s.

Tuesday morning, I woke up to the sound of birds making quite a racket outside my hotel room window, so naturally I looked out. When I did I was quite surprised to see a small flock of green parrots flying around outside my window. A quick search on Google showed that they were not native to the area but had established a large breeding population anyway.  They were noisy, but it was very cool to see them, especially for someone who loves seeing the wildlife when on vacation.  Tuesday night (26 MAY), we went to the lounge at Humphrey’s followed by swimming and spent some time in the hot tub before heading off to bed (after a little hotel room wine in plastic cups… Stay Classy, San Diego!)

Navigating The Barcelona Metro Like A Pro1.5K Total Shares